Sinclair Ferguson on the Relationship between church and kingdom 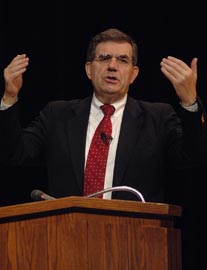 (2)The church is the sphere in which the kingdom expresses itself in this age. Mt 4:23ff There is a contrast between the now and the then. The present working of the kingdom is a not yet consummated working. Where can I see the kingdom of God working? In the church. The church is the sphere in which the transforming power of the kingdom is visible.
(a)The beatitudes are expressions of the Kingdom through Jesus in the church. Miracles are not just acts of power, but localized works which show what the kingdom will look like when all things are restored. A momentary glimpse of how it will be. Miracles are Jesus momentarily switching on the light. There is going to be a final regeneration of all things. The power is seen not only in miracles but in the moral transformation of those whose lives have begun to be transformed to the kingdom.
(i)The life of a disciple is the moral version of the physical miracle. In this imperfect form, we are given illustrations of what it will be.

I am the Pastor of Providence Church (CREC) in Pensacola, Fl.
View all posts by Uri Brito →
This entry was posted in Reformed Theology, Seminary Notes. Bookmark the permalink.