A Brief Argument for Weekly Communion 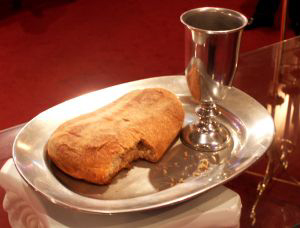 Many of us who practice weekly communion experience the immense joys and communal benefits of this practice. At the same time, I am aware that the vast majority of evangelicals–especially here in the South–view this practice with a certain skepticism rooted in romaphobia. Many modern evangelicals associate any order or structure with the Roman catholic pattern and worship. The reality, however, as I have demonstrated in many places (see brief exhortation as an example) is that weekly communion is a distinctly early church and Protestant practice.

Ryan Van Neste adds another argument for weekly communion when he writes:

Of course the longest discussion of the practice of the Lord’s Supper is in 1 Corinthians. Many issues can be raised here, but the fact that abuse of the Lord’s Supper was such a problem in Corinth strongly suggests the Supper was held frequently. Could it have been such a problem if it only occurred quarterly? Is this the sense that arises from the passage? Notice the wording of 1 Corinthians 11:20: “When you come together, it is not the Lord’s Supper that you eat.” It is widely agreed that the terminology “come together” here is used as a technical term for gathering as the church. This wording suggests that when they gathered they ate a meal which they intended to be the Lord’s Supper.[1] Though they are abusing the Supper, their practice (which is not considered odd by Paul) is to celebrate each time they gather. Even the wording in 1 Corinthians 11:25, “As often as you drink,” which is often used to suggest frequency is unimportant, in context actually suggests frequent celebration of the Lord’s Supper. Commenting on this verse, Gordon Fee notes, “This addition in particular implies a frequently repeated action, suggesting that from the beginning the Last Supper was for Christians not an annual Christian Passover, but a regularly repeated meal in ‘honor of the Lord,’ hence the Lord’s Supper.”

The argument is that if there is abuse of a particular practice in Corinth,  then there must be a frequency of the practice for the abuse to become common. Paul’s approach was not to lessen the practice, but to do it well and orderly. The Corinthian abuse of the Lord’s Table implies the frequency of the practice in the Church. Thus, Paul wishes to instruct the Corinthians that when they meet to eat and drink together, they are to celebrate their oneness in love and in good works.

I am the Pastor of Providence Church (CREC) in Pensacola, Fl.
View all posts by Uri Brito →
This entry was posted in I Corinthians, Word/Sacrament. Bookmark the permalink.