The Two Escobars: A Documentary 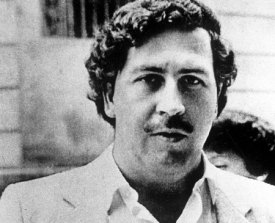 I have just completed the Documentary The Two Escobars. It is available for streaming on Netflix. The documentary tackles the lives of Pablo Escobar and Andres Escobar. Pablo was the notorious drug lord who became one of the richest men in Colombian History, and a legend in the world of drug cartels. Andres Escobar was a different man altogether. Andres found himself caught in this world of soccer and drugs. As the captain of the Colombian national team, Escobar could not escape the culture of unprecedented success and influence of drug lords who invested heavily in Colombian Soccer, and were thus able to  catapult the national team to their First World Cup in 1994 in the U.S.A.

Pablo Escobar (not related to Andres Escobar) made millions off the drug market while returning much of that money to the poor Colombian communities. These acts elevated Escobar to an almost messianic figure in the eyes of many Colombians. Escobar’s deep pocket also made him a sure donor to the Soccer agenda of Colombia. Escobar–a fanatic lover of futebol–used his influence and money to buy out referees and soccer players. And if politicians or athletic leaders opposed Escobar in any way, he arranged their deaths. He killed and killed again.

Andres Escobar, the man who scored the fatal own goal in the 1994 World Cup against the U.S., was the unfortunate casualty of this war. Andres would have been the first Colombian player to be bought by an Italian team (Milan) after the World Cup. However, the story turned after his return to Colombia. After having a few drinks, he was confronted by several men who mocked him for his own goal. Escobar attempted to converse with the men, but to no avail. He was shot six times and killed.

The documentary reveals intimate interviews with some of Pablo Escobar’s closest friends and several of Andres Escobar’s close companions from the unforgettable days of Colombian soccer.

The documentary is a worthy pursuit for those who love soccer and are intrigued by those  years in Colombia where Drugs and Futebol were inseparable.

I am the Pastor of Providence Church (CREC) in Pensacola, Fl.
View all posts by Uri Brito →
This entry was posted in Sports. Bookmark the permalink.