Book Review: Bill Bennett’s “The True Saint Nicholas: Why He Matters to Christmas” 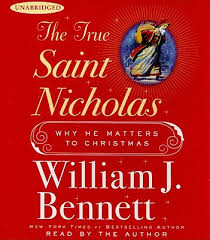 There are too many unknown facts, as Bill Bennett rightly asserts. Much of the historical data is purely speculative with the exception of a few references, poems and prayers in honor of Saint Nicholas. The Roman Catholic tradition has largely exorcised ol’ St. Nicholas from the Church, while the Eastern Orthodox tradition continues to celebrate his life every December 6th.

Bennett provides a pleasant read filled with fantastical stories and a delightful context to the Bishop of Myra.

The records at the very least seem to concur with the general perception that the Saint Nicholas that existed in the days of Constantine (yes, he most likely slapped Arius!) was indeed filled with generosity and abounding in love for all sorts of people.

Bennett illustrates that Saint Nicholas, the Bishop, had become commercialized only a few centuries after his death. The entrepreneurial spirit was alive and well in those days. The life of Saint Nicholas was being used by manipulative men to sell and to attract business. This commercialization is no different than the Americanized Santa Claus (invented much later in the 20th century).

At the same time it is important to note that abuses are always prone to happen, and that simply doing away with the figure in order to avoid the tough questions is no way to handle the matter. Rather, there is a legitimate way to use the history of Saint Nicholas, and its subsequent re-adaptation– with all its colors and jolly-ness in the North Pole Santa Claus– to draw us and our children’s attention to those rare gifts and virtues of the Christian faith.

Bill Bennett connects the modern Santa Claus with the faithful Bishop who suffered and lived for the sake of His Lord. The connection provides us with a healthy knowledge of the origins of this delightfully rotund figure loved by many whose history is frequently forgotten. The book offered a portrait of an ancient figure whose life was dedicated to the giving of gifts and to relieving the suffering of many. For this reason alone, Saint Nicholas is to be celebrated and remembered.

I am the Pastor of Providence Church (CREC) in Pensacola, Fl.
View all posts by Uri Brito →
This entry was posted in Book Reviews, Christmas and tagged christmas, december, roman catholic, saint nicholas, santa claus. Bookmark the permalink.