It doesn’t happen quite often, but once in a while when I recommend a book or a quote by N.T. Wright on facebook, I will receive a question that goes something like this:

“Do you approve of N.T. Wright? Do you think it’s fruitful to endorse N.T. Wright? Or don’t you know that N.T. denies Justification by faith alone?”

I addressed the first question on facebook and I thought I’d make it available here. My response goes like this:

I think the question ought to be more nuanced. In other words, humans and their ideas, especially new humans recreated by God, ought to be analyzed more carefully and charitably. As a pastor I recommend Wright to my parishioners with the same enthusiasm I would recommend C.S. Lewis, Schmemann, and Martin Luther. I have disagreements with all of them, but charity allows me to communicate with these great thinkers and gain from what they offer, while expressing sometimes strong disagreements on some of their contributions. 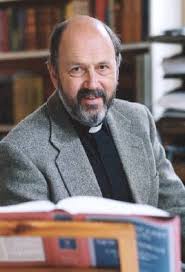 Yes, Reformed people, in fact, Christians of all stripes should read Professor Wright. His profound insights, his vision for a renewed humanity in Christ, his invaluable defense of the bodily resurrection of Jesus, and his commitment to the historical, Biblical Jesus make him one of the most gifted teachers and scholars of our time and The Jesus Seminar’s worst nightmare.

But what about justification? Shouldn’t we stand for the principal article of the Church? And by standing shouldn’t we reject anyone who denies it?

First, N.T. Wright has written and clarified many of his statements. He stated again and again that he does not deny justification by faith alone. I take him at his word. “But hasn’t he been unclear?” To those who think so, he will always be. To me and many others, I take his project to be fruitful, though not always agreeing. I find Kevin J. Vanhoozer’s humorous, but yet serious points on the Wright vs. Piper debate to be very helpful, and from what I hear from reliable sources, Wright agrees and finds Vanhoozer’s attempt to bridge the two paradigms extremely beneficial.

Secondly, the Reformation did not settle every issue. There are contemporary issues that still must be handled within our context. The Reformers did not exhaust the fullness of justification. There is indeed a robustly corporate view of justification that the Reformers–rightly preoccupied with Romish theological abuse–simply did not address explicitly in the 16th century. In this sense, Wright needs to be read and listened to attentively.

Thirdly, when one poses the question of whether we should eliminate such an author from our library because he is wrong on an issue, no matter how important the issue may be, he is betraying the charitable nature of the Christian vision and our personal libraries. Of course, he may choose to avoid Wright, and other authors who also had some skeptical theological presuppositions (like C.S. Lewis), however, his theological vision will be widely narrow and his ability to articulate a vision of the world will stop at the wardrobe, while we prefer to open it up and see Narnia in all its beauty.

Finally, the West’s over-emphasis on the individual is tragic. The individual matters, but Adam himself knew that the individual is not alone. Just as the Trinity is not alone, so too man needs to be a part of something greater. “Community” is not just a buzzword no matter how often hipster Christian groups use it. In its biblical sense, community is the essence of the Christian experience. Paul’s vision was highly ecclesiastical. The individual who divorces from the community loses his ability to be truly human. He breathes and eats as a human, but his breathing and eating desecrates God’s intention to incorporate him into  a multitude. N.T. Wright offers immeasurable contributions on this subject.

Should we read N.T. Wright? Yes. Read him often with the eyes of discernment. But again, discernment is the Christian’s best friend in any human activity.